We rely on cookies for storing your settings between visits and to understand how our customers use our website.

Mechanical ventilation system is being used by the majority of the underground car parks. However, there are still frequent complaints that underground car parks are humid and stuffy. The reason for this is too high or too low absolute humidity level according to seasonal conditions and insufficient air circulation.

During the winter or the rainy season, water and snow that accumulates on the surface and on the wheels of cars make puddles in underground car parks. Due to untimely air exchange, and as a consequence, high condensation, the level of absolute air humidity rises. Or conversely, in drought season, the air becomes too dry as a result of poor air circulation.

While there is no legal requirement for humidity measurement in underground car parks, it should be remembered that absolute humidity level control is important. Too high or too low humidity has the following negative effects that reduce underground parkings and garages lifespan:

Installation of absolute humidity transmitters in underground car parks and garages helps a ventilation system to carry out a timely air exchange. In the long term, this significantly reduces energy and building maintenance costs, increases the serviceability of buildings and constructions, and also solves humid and stuffy air problems.

In addition to the toxic gas detectors, Evikon MCI has a solution for the problem of too high or too low absolute humidity levels. With differential humidity control, one of the E2218 or E2228 transmitters is fitted in the enclosed space and the second humidity transmitter is fitted outside the building. These transmitter readings help a control system to switch the fans on as soon as the absolute humidity inside is higher than outside; or conversely, to switch the fans off when the humidity outside is higher than inside.

E2218 / E2228 transmitters are designed to measure both relative and absolute humidity and dew point values, as well as air temperature. They are characterized by wide operating ranges, high precision sensors and long-term stability.

The transmitters have two independent user configurable analog outputs (0-10 V / 4-20 mA) and RS485 Modbus RTU digital interface for Fieldbus networking. The instruments are intended for indoors and outdoors use.

The transmitters are available as wall-mount or duct-mount versions and with a remote probe. The E2228 instrument also has two configurable relays with closing contact for alarms or processes control and 230 VAC option. 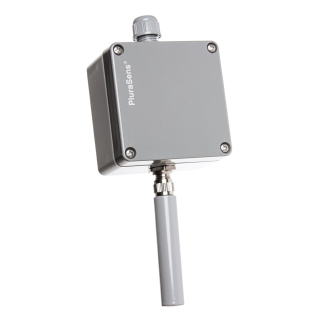 Whether it is a commercial or industrial plant, measurement equipment must be used in such places to detect dangerous gas concentrations and ensure…
04.07.22
#article #application note

What should be measured in ripening rooms?

Being a naturally occurring growth hormone, Ethylene became an integral part of the ripening process and even received the name “banana gas” in…
31.01.22